In the past five years, Brazil has increased cotton exports to the Chinese market by more than 15 times. In the 2016/17 crop, 41.8 thousand tonnes were sold. In the current 2020/21 cycle, which ends in June, 643.1 thousand tons have already been sold – and both the Brazilian Cotton Growers Association (Abrapa) and the China Cotton Association (CCA) are working to keep this pace up in the coming years.

On the night of April 26, the two entities signed a memorandum of understanding that formalized joint efforts to bring the cotton producers associated with Abrapa even closer together with the Chinese textile market gathered under the CCA. Created in 2003, CCA represents about 60% of the textile sector in China, covering several links in the cotton chain, including manufacturing plants. Abrapa, founded in 1999, covers 99% of the cotton production in Brazil and 100% of total exports. 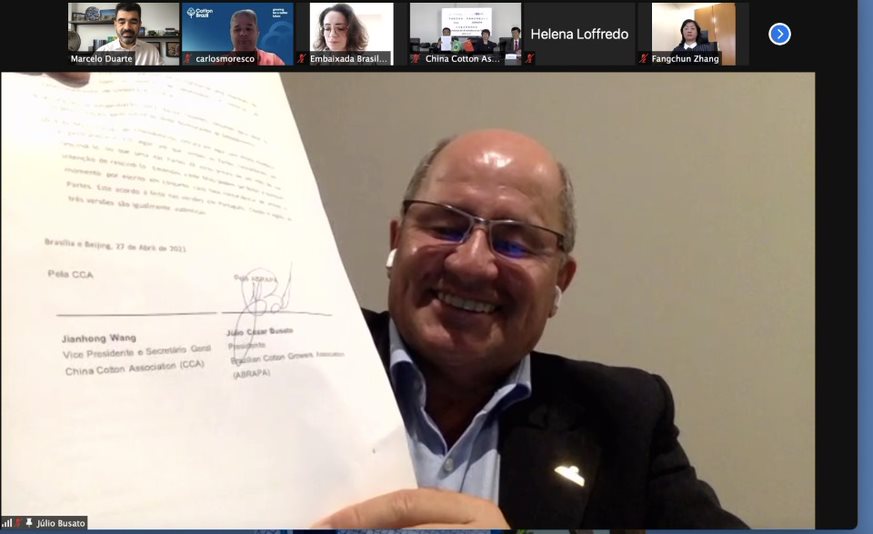 “I have visited Brazil three times already, and I see a bright future for both countries. We are united in the search for an increasingly responsible product, based on an environmentally friendly production system, which protects natural resources and also preserves the legitimate interests of workers”, said CCA President Fang Gao.

According to the Organization for Economic Cooperation and Development (OECD), China produces about 6 million tons of cotton per year. However, to meet the demand of the local industry, it needs to import an additional 2 million tons – a volume that places it as the largest industrial consumer of cotton in the world.

“For climatic and natural reasons, our acreage for cotton tends to remain stable in the coming years, as will production. We need a regular supply and a high quality product. In the medium term and in this context, Brazil can be considered the biggest player for China”, says Jianhong Wang, vice president of CCA.

Brazilians are ready for the challenge, says the president of Abrapa, Júlio Busato. “For several years, the association has been working to make this approach with China possible. We know the needs of the Chinese textile sector. That is why, especially for the last three seasons, the quality levels of Brazilian cotton have increased so much”, he said during the signing of the memorandum.

Data from the Beijing Cotton Outlook Consulting (BCO) indicate that while the Americans accounted for 43% of total imports by the Asian giant in the first two months of this year, Brazil delivered 37.5% of Chinese purchases. India comes in third, with about 12%.

“In the current season, China’s imports exceeded Brazilian domestic demand, positioning the country as the largest consumer market for Brazilian cotton”, says Marcelo Duarte, director of International Relations at Abrapa. Since 2020, Duarte has led the association’s office for the Asian market in Singapore, and his mission is to strengthen relations with the world’s largest buyers. 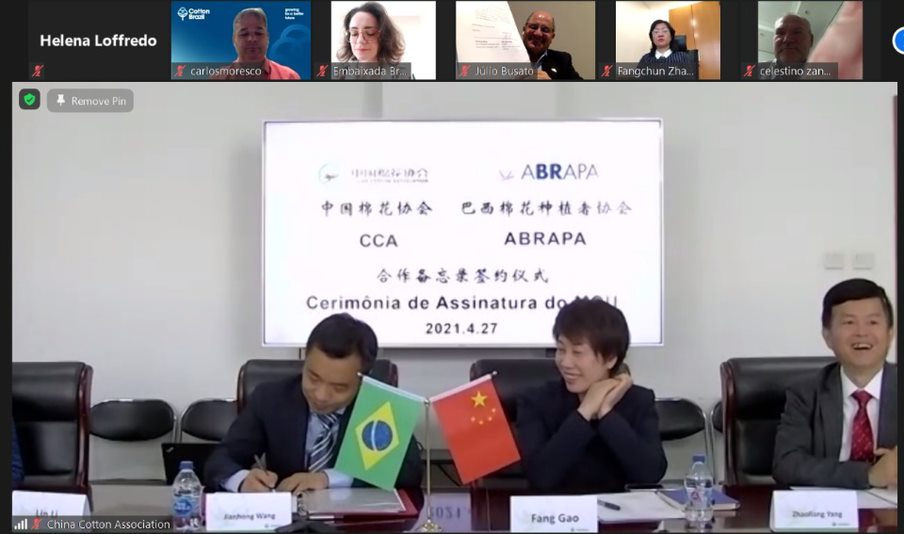 The gap between China’s demand for cotton and its production capacity tends to increase in the coming years. The OECD estimates that by 2029 Chinese purchases will increase 13% compared to the 2017-2019 average, while production is projected to grow only 3.9% in the same period.

“Abrapa has created opportunities in the Chinese market. The memorandum contributes to realizing the aspirations that the governments of the two countries outlined in 2019. One of them is to position Brazil as an important agent for the Chinese food security chain, and the other is to intensify our commercial cooperation”, said Ana Coralina Prates, of the Agriculture Section of the Brazilian Embassy in Beijing.

The first practical initiative to arise from the partnership between Abrapa and CCA will be seen in June. On the 17th and 18th, the Brazilian entity will participate as a supporter of the 2021 China International Cotton Conference, in Suzhou. The event will serve as a showcase for Brazilian cotton, and will count on an institutional partnership with the Brazilian embassy, the Brazilian Export and Investment Promotion Agency (Apex), and Anea (Brazilian Cotton Shippers Association).

Besides promoting the Brazilian product, the memorandum of understanding fosters the exchange of technical knowledge between the two countries in several areas, in addition to market and economic information. In the medium term, another objective is that the criteria for assessing the quality of the Brazilian lint can be standardized with the Chinese customs sector.